This week we've had some snowy weather here in the uk, it's been reallllllllly cold and the forecast is for yet more snow.

Today we've taken the kids to the park for some snowballing and sledging!! ( and yes my inner child came out) we tried our hand at building a snowman but it didn't really work because the snow was too powdery. A good time was had by all!! We had a quick stop off at my L.y.s for some emergency supplies and then headed home for a nice cup of hot chocolate :)

So, I should explain about the yarn. Last night my mum put someone in touch with my etsy shop storms end because they was looking to buy some crochet blankets for their baby ( due in march I think?!) we struck a deal so I'm getting to make some pretty baby blankies over the next couple of weeks.

I will put some pics at the end of the post of my progress so far and what the end product should look like :)

It's really nice to have generated a new customer in this way, she's a lovely lady and I really hope I deliver for her!! I love the thought of a nice new squishy cuddly baby wrapped in my crochet :D and I'm going to make a few little extras for her with the hope that she will spread the word a bit for me - she works in the local newsagents so there is lots of potential here.

I will keep you all updated!!
Have a lovely weekend xxxxx 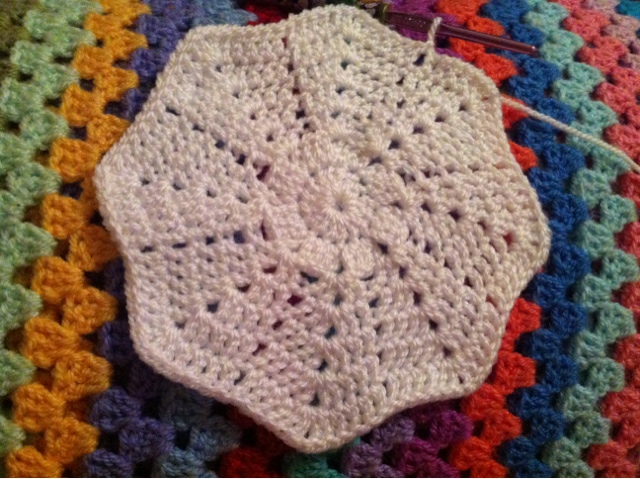 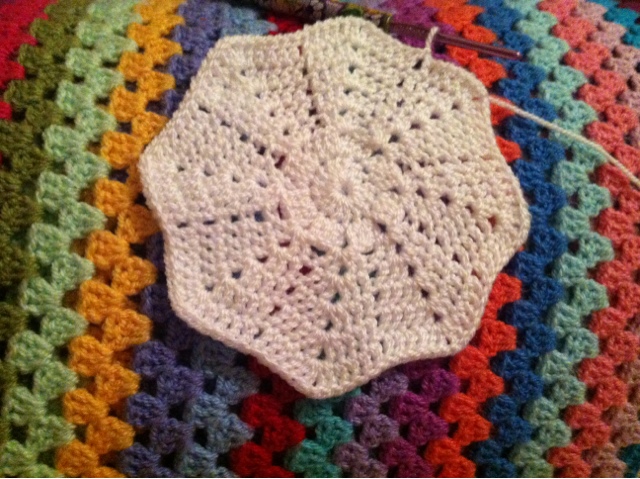 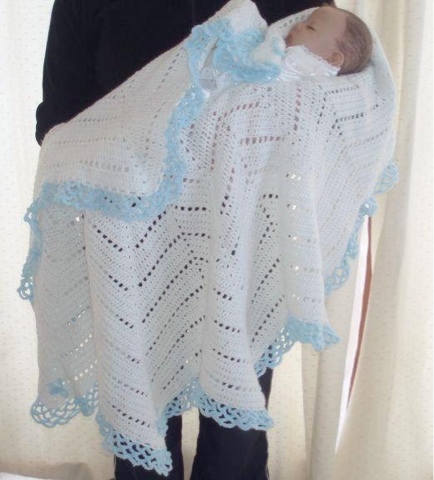 So, today I've gone totally continental style, and no, that isn't the name of the latest dance craze! I'm usually quite a slow knitter, hence the reason for purchasing the knitting machine last year, but I really enjoy the process of knitting. So, I decided that I would try my hand at continental style knitting, where the yarn is held in the left hand rather than in the right! I watched several you tube videos of the technique and decided to give it a try. Apart from the fact it's supposed to be quicker, it's also supposed to be better for the arms and wrists.

I'm still trying to master the basics and admittedly it probably would have been quicker for me to knit my regular way but its been fun trying something new. It's amazingly difficult to have to re-learn something you're already pretty au fait with, but already I'm seeing the difference in the purl stitches. In the videos I have watched on you tube, the ladies seem to do a pretty weird twisty thing to form a purl stitch where I've just found it pretty normal, no weirdness at all and thankfully I'm getting pretty zippy! Tension is something that I've still got to master, mines a bit all over the place at the minute so the stitches look a bit uneven but hopefully ill have it down within the next couple of days and my meagre 30 rows of an evening will be considerably more =D

I have found a picture tutorial on the continental method in case you want to try it yourself at the end of this post. Also, if you you tube " fast knitting" you should watch some of those ladies go!! Whew!! I bet they could knit a whole jumper in an evening!!! Lol

Well have fun, it's always good to try something new xxxx


*shoot it won't let me upload a photo
https://www.google.co.uk/search?q=continental+knitting&hl=en&client=safari&tbo=d&source=lnms&tbm=isch&sa=X&ei=uMn1UOWnAsa50QWshICQCg&ved=0CAgQ_AUoAQ&biw=320&bih=416#i=9 try this link though *
Posted by frog_prince at 13:32 No comments:

About the way I crochet. Because I'm a lefty, I find it difficult to crochet anti-clockwise the conventional way, the way that probably makes more sense. I crochet my own little left-handed-back-to-front way, that is to say, I follow the charts/pattern going left to right in my crochet.
I've never really had any major disasters doing it this way, and I think that my crochet looks just as good as anyone else's. The only thing that has bothered me has been putting up patterns and thinking that it would just be complicated and messy because of the way I do things.
However, after talking to a friend of mine, she suggested that perhaps I wasn't the only "lefty" crocheter to follow patterns in this way and that a tutorial like that might help a whole host of people just like me :)

It seems like such an indulgent thought that there may be 'others' out there, and why should I not, who's to say there's an absolute right or wrong way to do these things!

So, over the next few weeks I will be thinking hard of some nice tutorials to add to the site.

At the moment I'm working n some new stuff for my shops, I'm halfway grouch a crochet dress that I ran out of yarn for , but looking at the dress I'm not really sure I like it, I might unravel and see if I can salvage the yarn for some small projects I have in mind.

I'm also working on some heart shaped key rings/bag dangles/charms I've taken a picture of my progress so far, they are just waiting for some prettification. The heart pattern is really easy, so I've been indulging in another of my passions and reading! The book is part of the Hamish Mcbeth series by M.C Beaton, she's one of my favourite light reading authors and her books really make me smile. It's nice to be transported to the Scottish highlands during crochet breaks :)

The house hold is almost back to normality now that my oldest son has gone back to school, it seems really quiet without him here. Unfortunately one of his intended Christmas gifts arrived yesterday, a much anticipated new game for his Nintendo ds, so we spent a nice evening together snuggled on the sofa, him with the ds, me with my crochet all cosied up in front of the fire! I think it's the most quiet he's been for a long time lol!!! The game is much loved already, I love the little looks of excitement he gets when he's completed a new bit of the game!! 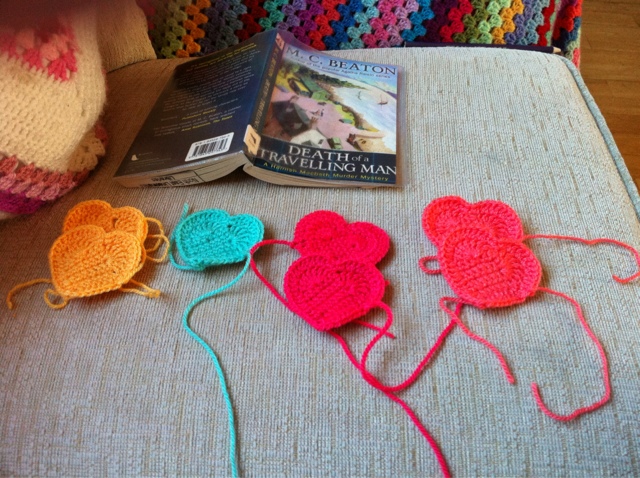 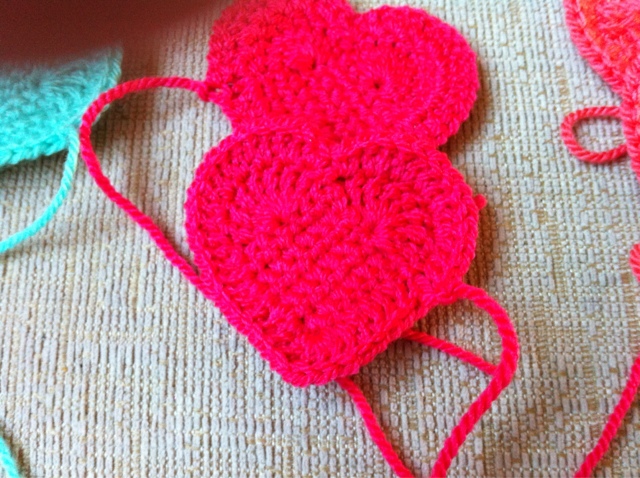 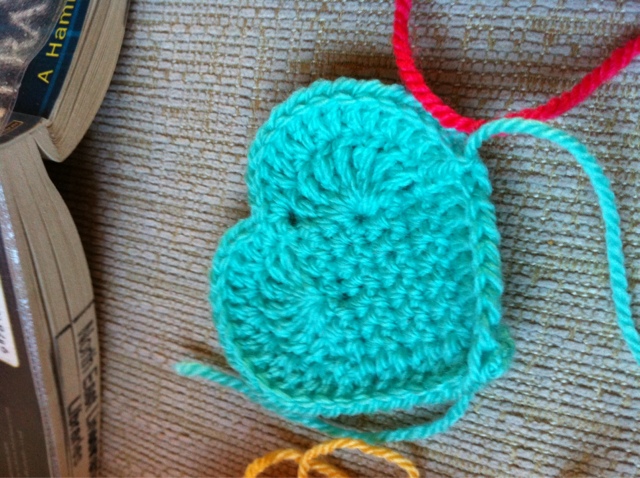 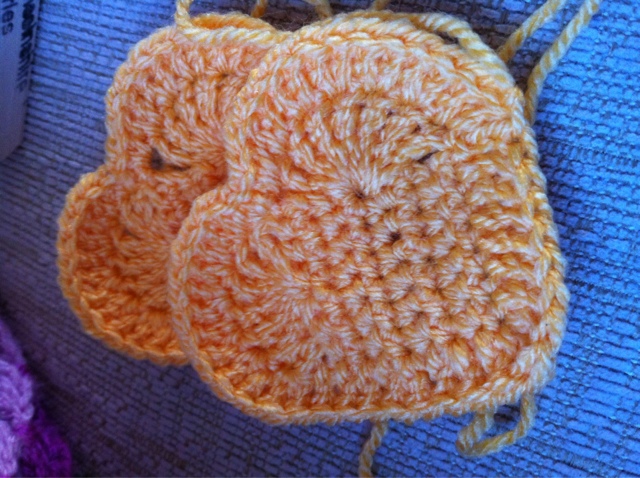 Ok so just before Christmas a friend of mine posted a picture of toast spread with Nutella and peanut butter and mentioned 'diet' so I was immediately hooked on the idea that a 'diet' could include this vision of loveliness! He pointed me in the direction of the "feast and fast diet" or 5:2 diet where you basically eat normally for five days a week and on 2 non consecutive days you "fast" and are allowed to eat 500 calories (600 if you're a guy) for the day. I decided to give it a go for a month and see how I fared, if I loose weight, fab I will stick with it, if not well, it's not too much hassle on my part.

So far everything is going good! I managed to loose about 3-4 lbs in my first week of doing the diet. It's not like a normal diet, I don't feel hungry all the time or that I'm missing out on anything, it's quite flexible so you can mix up your fast days to suit you, I tend to find days when I'm normally quite busy are easier to fast on because I'm not thinking about food all day. I'm only on my second week, but I've already picked u some good tips :
Saving some of my calorie allowance for a couple of coffees really helps!
Planning fast day meals ahed helps, if you have to google food and calories it makes you reallllly hungry!
Stock up on fat free yoghurt - it's your low calorie friend!
Strawberries are really low in calories and you can eat quite a lot of them and they are yummy and sweet!
Diet coke is low in calories if you struggle drinking water.

There are also loads of other health benefits besides weight loss associated with the diet, if you live in the uk, horizon did a programme about the concept last year with some amazing results! If you google you can find some more info, plus lots of recipes from other bloggers. I tend to ski breakfast anyway and spread my calories out between lunch and dinner but some people find it easier to have one big meal, it's down to you and how you feel comfortable. The thing I love most about this is that it doesn't really feel like a diet because its only two days a week, you can ride the hunger waves by thinking of tomorrow, I know it's early days but finding it really easy to stick to so far and I'm seeing results quickly. Bizarrely I haven't felt sluggish or moody or overly hungry and the day after my fast days I haven't over eaten or felt ravenously hungry, if anything my appetite is getting smaller, which can only be a good thing right?!

visits to another pond